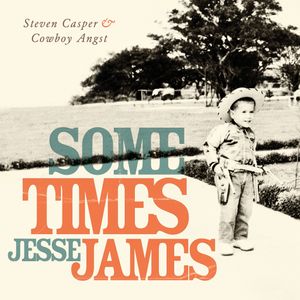 First thing I did when Steven Casper's new album (Sometimes Jesse James) came through the door was dive through stacks of CDs looking for the one Casper album I knew--- Topanga Ranch Motel. I remember being quite taken by it when I reviewed it in 2008, the four songs getting better and better as I listened. I was surprised, though, because I remember less of a crunch than I heard when I played it after finding it. I remember more of a country rock leaning than there is. I checked the review--- nope, I heard crunch. Here is what I wrote:

"Angst ain't the half of it. These cowboys are dipped in everything from cowpies to cowabunga and have a country edge, but they don't stop there. Toss in a bit of Foghat, Motown (that's right--- Motown!), San Francisco (the early 70s, which you can credit to violinist-with-angst Ross Levinson) and a whole lot of South cushioned (thankfully) by the less-than-Van-Zant voice of Casper (in this case, less really is more and haven't we all heard enough of those lame Southern Rock clones anyway?). But let us be honest here, the South is not the key anyway. It is the mix."  READ MORE

The Essence of Americana in Six Songs.

We absolutely loved Steven Casper and Cowboy Angst’s previous album SNAKES IN MY HEAD so got really excited when this new EP arrived through the letter box and …..woah….. (spoiler alert) it just might be even better! The CD had been in the car for over a week when I slid it into the player on a cold, dark January evening as I left the depot…..and as soon as the crunchy Bo Diddleyesque riff that opens the first song Down came growling from the speakers I just knew all of my cares were about to be blown away; and I was right. READ MORE 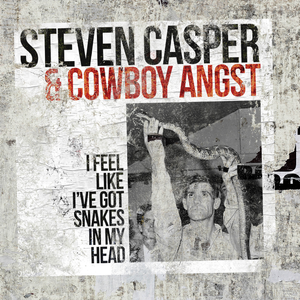 Named one of Music Connection Magazine’s “hottest unsigned bands” of 2015, Steven Casper and Cowboy Angst prepare to release their latest offering, I Feel Like I’ve Got Snakes In My Head on April 29th. The seven songs encompass roots rock, country, and blues and once again find Casper collaborating with producer Ira Ingber (Bob Dylan, JD Souther). In addition, Casper rounded up bandmates John McDuffie, Carl Byron, Herb Deitelbaum, and Jay Nowac, and added the guest vocals of sisters Charity and Linda McCrary to bring the songs to life.

Things start off with a ripe for the big screen instrumental “For A Few Dollars Less” which features guitar and harpsichord paying homage to one of Caspar’s favorite film composers, Ennio Morricone before segueing into the bluesy rocker “Driving Fast” and the moving “Restless Heart.”

The roadhouse-ready (complete with keys and tambourine) “She’s Bad” tells of a gal whose angelic looks are quite deceiving while the charming “Maria” has a decidedly Mexican flair. The thoughtful ballad, “Slow Dancing” and a reprise of “Driving Fast," featuring acoustic guitar, accordion and tambourine, round out this twenty-four minute player that you should definitely give a listen. -The Daily Country

'For A Few Dollars Less' brings to mind images of rolling tumbleweed and the sound of a mournful church bell ushers in lashings of twangy guitar. ‘Driving Fast’ kicks things into a higher gear with an early ZZ Top approved riff that works well as a solid platform to showcase some fine interplay between guitarist John Groover McDuffie and the organ of Carl Byron. The band is rounded out by the rhythm section of bassist Herb Deitelbaum and drummer Jay Nowac. I have to say these guys are all really great and I’d imagine a live show would be a very cool experience. -Red Guitar Music

'Restless Heart' and 'She’s Bad' are just the sort of Anti-Love song I adore; and both have choruses just crying out for a drunken sing-along on a Friday night in a bar or Juke Joint of your choice. -The Rocking Magpie

“For A Few Dollars Less,” an instrumental track.. feels like part of a soundtrack to a wonderful new western, a movie where things are going to go delightfully wrong, and where the hero isn’t a completely laudable and virtuous character. -Michael Doherty's Music Log

Things are heating up out there. The Band Perry, Kenny Chesney and Blake Shelton have offered fresh, new material over the last month or so. Willie Nelson, the Randy Rogers Band, Gretchen Wilson and a host of Americana bands and singer-songwriters have arrived with new music, too. I've listed some of my favorite new songs below.  Read more

Trouble (Silent City Records)
There is just no disputing the good time of bad times this EP (not LP) provides the listener. Five tunes, one done twice, to take you deep into the heart of American music done road house bounce — blues, r&b, zydeco, Tex-Mex, Looziana all tied up in a just dazzling display. In other words, rock and roll to delight the soul. Read more